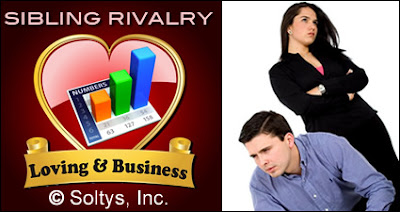 You have most likely seen three of Donald Trump’s five children in the boardroom of the Apprentice show. Beyond TV, they all work in the business with significant responsibilities. In the boardroom you have little doubt that they have inherited a lot from their father. While the rivalry in that boardroom is more for TV, that is not the case in most family businesses.

No two children in any family are alike. They have different talents, skills, personalities and levels of ambition. Even though parents may want to treat their children equally, that is next to impossible in business. There are few companies that have more than one head of company role. Beyond roles, issues of rivalry arise in terms of status, distribution and contribution of money, decisions and eventually succession issues. The examples that follow illustrate some of these issues.

Company One has two sons, both raised in the family business, working since high school. The older son is more of the worker but does not invest his ego in the business. The younger is far more social. Title and position are far more important to him than the actual work. The business was left to them equally but since they have been running it, there is little equality. The older son is the President of the company which is an aggravation to the younger son. Add to the mix, the older son marries and brings his wife into the business; she too is a hard worker. The younger son’s wife has no interest in the business. As time progresses, resentment builds from the working wife at the entitlement approach the younger son and his wife take to the business. Through rough times, when money is short and salaries cannot be paid to ownership the working son and his wife take the brunt. There have been several attempts by the older brother and his wife to buy out the younger brother’s interest but the younger brother is quite comfortable with the situation. It will likely be the never ending story unless a life event changes the direction.

Company Two is very similar to Company One, having two sons and one working wife. The difference here is that both sons work, but with a tendency to build their own revenue rather than working to build the company. They consider themselves to be rainmakers. The younger son’s wife works in the business and in addition to being a producer also takes on a lot of the management duties. The disputes that arise are great in that the older son feels that his brother and wife are a package deal with no additional division of profits or salary. The older brother feels he does an equal amount of work since he takes on the bookkeeping duties. One brother is pro-growth and the other is not. As you can imagine, when faced with decisions of growth, tempers rise and nothing gets done except to widen the divide of the company. The rift threatens the family relationships and will most likely result in the company being split in two with the brothers each going in their own direction.

Company Three also has two brothers but, unlike Company One or Two, neither brother is head of the company. A partner was brought in when the company was formed who serves as president and has a one third interest in the company. The brothers have significant roles in the company but the three together operate as a board of directors making decisions. Their earnings and rewards are aligned with their roles and distribution or contribution as shareholders. A plan is in place that details distribution of the company through buy-sell options funded with key man life insurance, should something happen. They have also outlined what happens in the event of a sale, need for changed roles or in the event of a retiring owner. They act corporately on behalf of the company rather than as individual owners.

Company Four is owned by a brother and sister. There is a fairly large age disparity. The older had begun working in the family business under the father when the younger was a small child. There are two other siblings who never had an interest in the business. When the father passed, the business was fairly small so it was more of a working concern than a matter of an asset to be divided at that time. Through hard work, the company grew far beyond the father’s original vision and post-college the younger entered the business. While the rivalry here is not with animosity, it is there and mostly based in each one’s perspective of their contribution and impact. They are very different with complimentary talents. Since the older one has been in the leadership role for a very long time, there is a feeling that what had been built has been earned with years of toil whereas the younger came in as an owner and an executive. The younger one will always feel in the older one’s shadow and has chosen to focus on areas the older one does not to grow the company and establish status. While it is great that both use their talents and compliment each other, it will most likely be difficult for the younger one to take the lead role as their paths of leadership are divergent. They do have a board of directors and in some areas work corporately but, in most ways, the company operates more like a sole proprietorship. Challenges in the future will be in terms of succession, not only in this generation but also the next.

It is very difficult to have siblings work in a business equally. What may start out looking like the perfect scenario is likely to change over time. It also happens in partnerships of non-related parties. The best of all worlds is to design the company which creates an entity that all individuals work for within their roles. Contributions, investments and assets can be monetized and governed accordingly. There will always be rivalries among siblings, it is natural, but the impact to the business can be mitigated. No matter how much love there may be in the family it does not equate to love in the business.

Thank you for sharing an interesting and very useful article. And let me share an article about health here I believe this is useful. Thank you :)