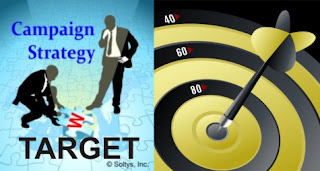 There are a number of reasons why campaigns either succeed or fail.  Over the next few days, we will look at these beginning with targets.  Perhaps the number one reason that campaigns fail or succeed is the definition of the target.  A target is not as simple as being a person, a demographic, or a type.  Those are all characteristics.  The target for a campaign must also be defined in terms of the actions you want to occur that will allow you to win.
Take for example the current political campaigns which are certainly a business.  The target is defined as voters who will vote for the candidate and allow them to win the election.  Sounds good initially because there is an action required of the target but this is so general, it will inevitably cost much more than a targeted campaign.  If a political campaign were run like a business campaign, some of the parameters defined might be as follows.
1.      How many votes are needed?  If you are looking at the actual vote count the answer is an easy one more than all other candidates.  However the US uses an Electoral College system in which the popular vote in essence is a vote for the electors who will cast the vote in the vote of the electors on the second Wednesday in December.  That certainly changes the target.  But if it was based on raw votes and there was no plurality rule, your campaign needs to reach less than 62% of eligible voters – the ones who vote.
2.      How do you find voters who will vote?  Of the approximately 207 million people in the US who are potentially eligible to vote in the next election, it is estimated that less than 150 million will vote.   Since voters must be registered to vote and their voting history is recorded and publically available.  In fact the US Census Bureau has great data, to do data mining in which you can begin to build a better target group.  You will also be able to find out how many newly eligible voters generally vote to help you define your target as well as voters who can no longer cast a vote.  With probable voters defined, you can now begin to think about how to reach them and get them to vote for your objective.
3.      How do you find the ones you need to win?  With voters defined, there is more information than can tighten the work of your campaign.  Looking for consistencies as well as inconsistencies of actions will define your approach, methods and strategy to enhance the outcome of the vote.  For example - A certain percentage of the voters who vote, do so along party lines without fail.  This has averaged approximately 37%.  So the target voter is now making sure that the portion of the 37% that can be counted and the portion of the 63% that can be influenced are moved to your side of the vote.
As you can see in this example (used because it is a current issue and applies well to almost any business model) rather than needing to target potentially 207 million people the actual target is less than 60 million people who will potentially cast a vote.  It is those votes that will determine the election.  It is still a large number but through the use of data mined, targeted strategies can be employed which always produces a better outcome with greater efficiency and less cost than a general campaign.
If we were looking at this as a business rather than as politics, we would have to question spending.  Perhaps spending very little in general campaigns and the bulk of the money on targeted voters would be a better use of funds.

In this example, spending attempts to reach everyone in the general population in hopes of reaching voters.  Spending a small amount on general campaign costs for example 5 - 10% of the dollars per vote on general efforts and 90 - 95% per targeted voter, the same proportionate dollars that were needed to win votes targeted might reduce the cost of the campaign by over fifty percent.  While that number is extrapolated and might be high, any number over 10% when you are talking the quantity of dollars spent in these campaigns would most likely get the attention of every person in a “C-level” role of a company.
The bottom line – in campaign strategy, no matter what type of campaign – business, political, military or any other – an undefined target will always be costly and reduce the chance of winning. 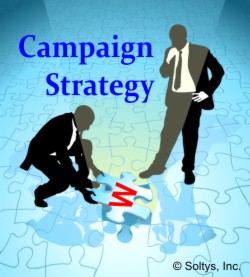 Campaigns are all about a methodology that produces a win.  It does not matter whether it is a marketing campaign, military, political, fund raising, branding, customer loyalty or a big sale: the bottom line is the same did you win or lose?   How you get to the win is where the strategy comes in.

The series of steps, interwoven activities, milestones and planning are a kind of a puzzle.  Unlike a simple sale where there is little that leads to the exchange of dollars, campaigns often begin with a battle for the mind of those involved in the objective.  Campaigns are process driven machines that not only consume energy but create energy and drive results.

Within each campaign, there may be multiple sub campaigns that are occurring sequentially or simultaneously.  There are many moving parts at any given time all tied together with the central objective and focus on the win.

Right now, we are witnessing political campaigns for the presidency of the United States.  If these were dissected, we would find that they are a lot like any business campaign.  Like most business and military campaigns even once the prime objective is accomplished the campaign has a long tail of after effects that are set in motion during the campaign.  Effects may be either good or not so good.

Great campaigns bring long term value and results because the machine and all of the energy does not cease when the objective has been won.

This month, our series “Campaign Strategy” will explore the components of campaign strategy – what works and what does not and how to make campaigns work for your business.

This month we have explored many facets of enterprises.  Whether built by design, formed by need or the result of an accident, the components of an enterprise are assets to be bought, sold, traded, shared and/or leveraged as a method of creating value and money.

A great example can be found in professional sports teams that need players with skills, talent and experience.  These are a type of an enterprise.  Each player added to the team is not only a player in the game but also part of a commercial machine that has the capability of generating money and driving value.  That money comes from the winning power of the game, ability to draw fans and the sales of items fans will buy because the player is on the team.  Building the best team is not restricted to winning games, it is all about winning dollars.  These are an enterprise by design.

Enterprises that can quantify the value of all components have the advantage over companies where valuation and revenue generation are tangled and not able to be isolated.  Like the sports player, there are absolute costs that can be tied to the player as well as revenue streams that are generated as a result of the player being a part of the team.  There is an isolated value as well as the value that the team derives as a result of the assembled players.

The next factor of valuation is performance.  An asset such as a player has value even if the team does not have a winning season but if the performance factor is added and the team has a great winning season, the team’s value escalates.  If the player is an outstanding individual performer in addition to being on a winning team, the player asset has value that may be greatly increased by leverage.  The leverage may be to bring value to the team or it may be for what the team gets in return in a trade.

An intangible part of the value that drives real value is loyalty.  Does a consumer spend more money in the enterprise because of loyalty to the enterprise through brand, quality or convenience?  In our sports analogy that equates to fan base where the rational consumer changes to the consumer who embraces and owns a relationship with a team or a player.

The bottom line is that in the analogy and the best enterprises any component has valuation and potentially the opportunity to increase the value of the enterprise whether bought, sold, shared, traded or leveraged.  Enterprises built by design, recognize that any component is an asset and the greatest value may not be in holding the asset.

Thank you for following the Enterprise by Design series.  We hope that you have found the content valuable and insightful.  Comments are always welcome.  The September 2012 series will be Campaign Strategies.