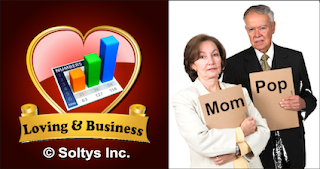 Mom and Pop businesses generally refer to smaller, family run companies, whether they are husband and wife, siblings, partners or other close groups. Small is a relative term and may not always refer to the actual smallness of businesses as much as how they were started and how they are run. Today’s story is a good illustration of Mom and Pop business, using my parent’s business as the example. Even though your company may not be in the same type of business, it has lessons that apply to all.

My parents bought a small paint and paper company while I was in college, with money that my father received as a part of severance when the mobile home factory where he worked was sold. The store was in a very small, older building on the main street that ran through Osceola, IN. Osceola at the time was basically a stop light with three corners (the fourth was a vacant lot) on US 33, hugging the railroad tracks between South Bend/Mishawaka and Elkhart. A part of the town, north of the river, seemed like a different town all together, but within the boundaries loosely considered to be the town, there were about 1,500 people. If you were to look at the business signs of the town, the names were all related to the owners. The only evidence of national branding was the type of gas carried at the town’s two gas stations. At that time, before the Internet and big box stores, people did business with people they knew and kept a lot of their business local.

Mom and Dad did not have a lot of business experience going into the venture. Mom had been a bookkeeper and a homemaker and Dad had worked a number of jobs from bartending to factory work but he had an entrepreneur’s heart, a belief that if you worked hard enough you could make great things happen and, perhaps most important of all, little if any fear. The love they had for each other would become the heart and soul of the business.

They named the business “Dangi” as a combination of Dan and Ginnie, gave the store a new look and greeted customers with bright, hopeful smiles and an excitement that could be felt in the air. Soon after opening they added carpet to their products and services. Carpet takes a lot of space, so plans were made to build a new building on the lot next door. That was a huge step in growth and belief. There is nothing like a building or growth project to literally infect everything in the business, almost like a virus it spreads. There is a lot of good that came as a result, the bank financing the loan forced them to do a business plan which had never been a consideration before. Dad being the more social one, and a bit of a story telling Irishman, told everyone he talked to about the new building. What it would mean not only for the business but the community and with a lot of pride, the legacy that would become a part of the family. It was hard to miss the new building as it was constructed since anything new in a town that small gets noticed.

Taking this giant leap forward, Mom and Dad started attending industry events to learn, network and fuel dreams about the future of their budding enterprise. They were involved in the fabric of the community belonging to the local business association, supporting the schools and sponsoring little league teams. As my younger siblings graduated from high school, they worked in the business as well. Mom and Dad’s hearts swelled with pride.

In this growth, other non-family employees were also added and the dynamics began to change a bit. We saw that people treated our Mom and Dad much as we had as kids – if you don’t get the answer you want from Mom, go to Dad or vice versa. We also saw our parents and even siblings unconsciously slip into comfort zones – Dad had no desire or interest to know anything about the books, in fact, he had never written a check. Mom not only took care of the books but the housekeeping and décor of the store. My sister was eager to gain product knowledge and delighted in her growing expertise, enjoying some outside sales, and my brother enjoyed the true customer facing side of the job – installations.

Like many Mom and Pops, growth had waves motivated by need and opportunity, they had not found the music of consistent business rhythms. There were struggles and triumphs but no matter how good or bad things were, it was theirs, loved like a child for what it was and what it could be.
Mom and Dad were like many small business owners, basically taking it one day at a time. Their dreams were not converted to plans and there was little done toward things that were far in the future like succession planning or risk mitigation.

About ten years after buying the business, they received the news that my Mom who had been the picture of health had advanced cancer. Their attention and passion turned from the business to taking care of her health and pursing with optimism a battle that could not be won.

The damage to the business was fatal. In the fifteen months that they fought the disease they could not give the business the attention needed. Their roles were vitally embedded without any way to transition to others even if there had been enough depth in staffing to take their places. If the financial hit of small business owners in a health care struggle had not been tough enough, taking them out of the business took away the income generation. Without that, inventory could not be restocked and the store showed its decline. Even though my sister and brother tried, they could not add the duties and responsibilities of my parent’s roles to their already full plates.

Once Mom passed, the business died too. The love that had given it birth and stoked the passion was gone. The story and memories were a lesson for me. I was at the time living in Texas and not able to do much to help them but through them I certainly learned many lessons.

It is hard for small to medium sized businesses, especially family owned businesses, to take the time and put the infrastructure in place that will allow the business to succeed them whether it is through a sale or an heir taking the reins. The machinery of the business is the business and the passion is the fuel. Both are needed. I can replace passion but it will not help if the machinery is not there.

So true and very touching. Kudos for the courage to share this with your clients and followers.

As the owner of a 30 year successful business I could not agree more with this blog. The business infrasructure is so very important if you wish to pass your dream on to future generations.Well Done!

Thanks for sharing Pat. So long ago, but feels like yesterday as I read this. I was on the side lines, but it was clear to me that Dangi was the vehicle your parents used to share their love for each other.

Thank you for your comments, they are appreciated.