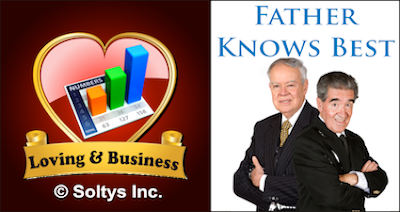 Whether it is the patriarch or the matriarch of the company, giving up control of something in which you have invested sweat, tears and usually a lot of money is very hard. These people were often the first generation that established the company. They usually have the vision, create the mission and drive through challenges with a passion that powers the company through. They are not afraid of taking risks, often taking a cutting edge position. This is their life as some would say “come hell or high water.” It is loving and business at its best.

Most of these founders hope to pass the company to their children and potentially future generations. As they build the company, they are often the sole, or at least primary, decision makers. Hence, when they begin to bring the family into the business, it is hard to step back and allow others to become the decision makers, sitting back when they feel like they know what is best for all. In cases such as the family business described in the story that follows, there is no guarantee that the next generation is willing or able.

A family I have known for years has built a nice empire within their industry. It has, at its core, a service company that delivers licensed services to affiliate members within the territory that it has rights to. There are other related businesses within the enterprise. Over the 50 plus years the family has owned the company, growing it from concept to becoming a recognized force, it has involved every member of the family in some way. The founder and father is often considered to be an eccentric old country boy type who is often a bit outlandish, sometimes brash and for the most part loveable. There have been multiple wives over the years, each newer wife having fewer responsibilities in the company to the most recent having no impact other than producing a love child, far younger than the first five children. The first five have led an entitled life fully benefitting from their father’s success, generosity and in many cases bail outs from trouble and bad relationships.

Each of the original five have held titles and some jobs in the company, but few actually took these as much more than official duties to be attended by the family while the father made all key decisions including hiring people to carry out the work of the company. Most of the employees only saw the five when the father flew them in for a board meeting or company event.

As the father was approaching the age when many people would be thinking about retirement, he tried putting more pressure on the original five to take responsibility in the company. It did not work well at all. Worst of all they said he was the problem and too controlling. On the advice of outside professionals, he put the company in an irrevocable trust with the original five and a few business contacts on the board of trustees. Employees ran the company and supposedly went to the trustees for decisions, but in reality everyone knew the father was a phone call away and quite willing to offer advice. Things were tolerable and the father entered a phase he called retirement. He met his current wife who, a couple of years after the marriage, presented the septuagenarian with a son. None of the original five were pleased about this especially when they considered that their inheritance might be divided to cut the newest sibling in.

Since the transfer to the trust, which unfortunately occurred about the beginning of the downturn in the economy, the company has been losing ground. There is a void of leadership. Many of the staff members who were loyal and long-term were dismissed. The father technically has no control of the company within the trust, but is the first call in a crisis. Fortunately for all, he is healthy and able, but that will not last forever. The newest son will most likely not reach adulthood in time to take a leadership role and the original five are at or considering retirement themselves.

Perhaps the best thing would be to sell the company, but that really should have been done prior to the trust being set up. The value is greatly diminished and there is no real leadership and certainly no passion. There are fewer fights among the original five as their roles as trustees are well defined and limited. The father has pretty much decided that, since he cannot step in and really has no desire to work that hard again, the company will drift much like a boat without a motor.

Could things have been different? Yes, of course but often the toughest decisions are those that should be business decisions, but get derailed in family issues.

The father knows that the company will bump into a shore when its master agreement expires and there will be a transference of the assets. At that point, the company will be dissolved. All in the family will have lived well and reaped the benefits. Even though it is not his original dream, he has proven that father knows best.