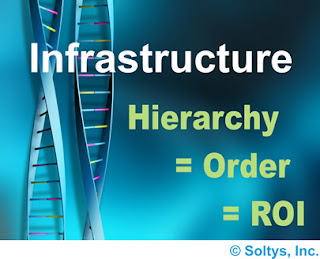 Many people think a hierarchy is simply the personnel organizational structure, but this is only one of the components. Hierarchy in a company defines order in everything from communications and decision making to each process that is to be executed. Consider these examples:
There are hundreds of examples that could be used, but these should have your mind churning. Everything that we do in a company is governed or touched by rules of hierarchy. In most companies a lot of these are unwritten, but understood, and some are left to common sense. These rules are a part of the infrastructure of the company and are integrated in a multi-level/multi-dependency matrix.

It is inherent in human nature to crave order. We do not like chaos, indecision and lack of definition. In fact, the most efficient and often profitable companies are those in which hierarchies or process, communication, tasks and people are defined and understood.

To illustrate the impact of order, let’s look at real estate companies and agents. When I was first licensed a long time ago, there was not much training. It was basically “Here’s a desk and a phone, now you are on your own.” Fast forward 30+ years later and a friend interviews a real estate company as a prospective licensee. Competencies are tested prior to the interview, and there’s a check of the candidate’s background through the Internet and social media before an interview is scheduled. The manager not only talks about the training required to be successful but begins to talk about how the person will approach work, from building a base of contacts through the pattern of work that will pay off in a great career.

What a difference! No guidance to a system of onboarding, ramp up and accountability to a career. The dropout rate when I started was such that you could look around any room and know that over half would not be in the business within less than a year and that within three years only about 10% would remain. While not every company operates with the kind of systems, order and hierarchy where my friend interviewed, that company’s stats far exceed industry norms. They start a fairly large group of new agents each year in addition to the experienced ones they hire. Each of the agent groups from new to the well-seasoned have significantly higher per person productivity, per agent income, per agent ROI to the company, and lower dropout rate than any company in their market. Their managers build careers rather than babysit problems. They are the company of choice in the market.

The upfront investment creating the hierarchies and systems, as well as the maintenance, is significant, but the payback far outweighs the cost. If you think about a problem that you faced in your company: a transaction, decision or recruiting; would hierarchy have made a difference? Usually, the answer is yes. There is very little that is random in business that has an ROI and nothing random can be replicated.