The ROI of Hierarchy 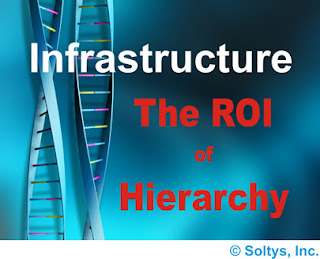 A great example of a company that understands the importance of hierarchy and has integrated the rules throughout their organization would be the McDonald’s Corporation. Every aspect of the business is driven by rules of hierarchy, creating standards and priorities quantified and held to strict parameters within their defined metrics. About the most random thing you will find in McDonalds is the “dash” of salt but even this is trained.

If I were to give you the task of creating a consistent product that could be delivered throughout 14,000 locations in the US and 33,000 worldwide, with a combination of company owned and franchised operations, it would be daunting. Even if all of these were company owned, it could not be done without rules that operated within a hierarchy.

A McDonald’s hamburger is cooked according to very specific rules and timing to ensure that you have a hot, freshly cooked hamburger with your hot fries and beverage. More than process, McDonald’s understands the role of hierarchy in creating profit from its menu. They understand that if food products are offered in specific combos, more of each product will be sold than those offered a la carte. This bundling is well understood from the creation of the menus, to the pictures used in marketing, right down to the scripting for orders. For example, a Quarter Pounder meal with a medium drink might be $5.25 (varies) with a hard cost that is probably less than 20% of that amount including supplies required to serve the meal. Ordered a la carte separately the total cost will be a little more but the customer is more likely to pick and choose so more money is made from the bundled meals due to quantity sales. Since that is the case, the positioning of the choices, dialogue of offerings when ordering and cost consciousness of the consumer drive the rules to sell the quantity over the a la carte. This is hierarchy at work, producing measurable ROI.

Another example from McDonald’s is there coffee offerings. McDonald’s has always served coffee, as far as I know. It was not until the introduction of gourmet and specialty branded coffee shops that there was a problem. A standard cup of coffee does not cost very much to make and serve. Hence it has a high ROI. However if your customers start to go to a competitor for coffee at a higher price than yours, you better take a look at the problem. Enter McCafe. The true hierarchical rule here was that if people went elsewhere for coffee, not only did you lose the sale of the cup of coffee but more importantly, it was not an isolated sale and impacted food sales. It was not just the sale of the food to the coffee drinker but it was also that a large number of those people had others they fed, especially kids. Coffee had a hierarchical presence and a defined impact on company profits.

The offering of gourmet coffees at McDonalds and in McDonald’s branded cafes had an incremental cost differential which was absorbed in the pricing. The marketing campaign that accompanied it also opened up new market segments and guess what – it sold food and resold the brand through extension.

While I do not have the specific numbers of the impact of coffee services in McDonalds, I believe that there would not be McCafe’s or gourmet coffee offerings if the ROI was not there and in significant quantity.

McDonalds has franchise locations, affiliates and company owned stores that all must follow the rules and operate within the dictated hierarchy. A part of these applies to the governance of a franchise. If you wanted franchise rights for a location, the initial cash requirement would be north of $250,000, unencumbered. This is only the start of the costs for a model proven to deliver profit. According to their 2010 Franchise Disclosure Document (FDD), the average store, open for at least a year, had sales volume of $2.4 Mil with profit in the mid to high six figures. Owner operators only, investors are not allowed.

There are few decisions to be made and poor performance, lack of quality or cleanliness and any other infraction of the operating rules brings the ultimate hierarchical rule. You lose your investment, your rights to the franchise and location as well as your job. A transition crew comes in and the next morning, the location opens with a new crew and everything aligned with the McDonalds method.

McDonalds has many good case studies that illustrate hierarchy in every aspect of the company from decisions through product, all prioritized by the impact on the bottom line and sustainability of the company and brand.

Thank you for sharing the information, the article is very interesting to read and may be useful for everything