Gifts in the Market 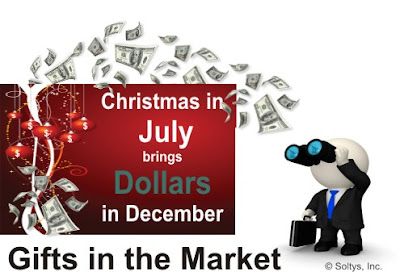 Christmas in July is sometimes about discovering the gifts that are waiting for you to receive them. In this series, we will continue the story of the owner of S and Company who has embraced the Christmas in July initiatives.

The owner of S and Company really wanted to make sure that everything possible was in position to make sure that the company and the people in the company would reach their goals. As he was searching for opportunities, a news story on the web caught his attention. It was about how change occurs in communities that is fairly subtle and a series of separate events. Once the changes accumulate, the landscape is changed and totally different. Because the changes are not necessarily related and have little relationship in timing, the change does not really stand out.

He thought about the market place. Each year when the company writes the business plan, the marketplace data is used as a part of the metrics. But what actually changed in the marketplace that might have created unseen opportunity? All of a sudden, it hit him. While some of the revenue and units available in the community had not changed greatly, the competitors had. One group of companies had a major brand change; others were suffering an identity crisis as their brand had been sold. Several companies had merged and a couple of others were closed. There were others that were doing better than ever and some in which owner age, health or other challenges meant that changes for those companies would soon occur as well.

The more that he thought about what had occurred in not even a year’s time, he realized that the way the company had been using market place data in their business plan hid significant opportunity. There were gifts in the market just waiting to be claimed.

Some of the opportunities were fairly small, others had great potential and all would require a strategic pursuit. He realized that the cumulative value of even a portion of these opportunities more than guaranteed that the goals for dollars in December would be met. It would take a team effort and it would require both internal and external messages. It would also require that the company operat from a position of strength.

He called the managers together, as well as the division heads across the company, to explain the opportunity he saw. Excitement grew as each person in the meeting realized what this would mean. He told them that this would require a team effort and each of them would have a significant role as individuals and in the way they would work as a company. The meeting had been planned to continue through a working lunch so that he could take advantage of the excited mood in the planning, tasking and launch. The buzz was infectious.

At the conclusion of the meeting, campaign names and dates were established, targets and strategies defined. He came back to operating from a position of strength and asked each what that meant to them. There were a variety of answers, some that did not match the people who offered them. In the end he said that there were many times in which he felt that they had each, and as a company, been playing defense – countering, protecting and explaining. This was quite natural as all were at least in part problem solvers. While problem solving would not go away, he wanted them to understand that no new ground is gained in playing defense. He wanted each one to assess their own strengths and the company strengths and to utilize those to drive momentum. Let others play defense while they moved forward and conquered targets. This would be important in being effective and efficient as the one playing offense rarely had to play defense.

You created some decent points there. I looked over the internet for any problem and found most individuals goes as well as with your web site. The latest Tweets from Celebrity birthdays with 22 million users visit our website each month.