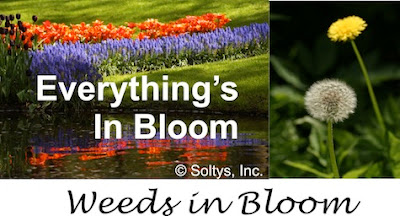 Weeds bloom just like any other plant.  There are weeds in gardens and in companies.  Weeds have a special type of beauty when in bloom.  We are often intrigued as well as frustrated by their vitality, whether or not they are wanted.  They are often perfect within their own right, but do not conform to the ideal cultivated.  The survival of weeds is interesting, even where they are offered little hospitality they exhibit strength and will to be a part of the landscape that by comparison makes others appear weak.  Their persistence is challenging, sometimes obnoxious and given a chance, they will take over.

The determination of whether it is a weed or a preferred specimen is often a determination of preference, purpose and dominance.  Nurturing and nourishing will strengthen everything that shares the same environment.  Maintenance and selection determine whether or not the weed will be allowed to stay.  Aligning the weed to be utilized with purpose may not make the weed the preferred specimen but may allow it to serve its purpose.  The same holds true in the business world too.

Archie was a weed in the office.  He sat directly behind me at one of my first jobs and did everything he could to make his presence known.  He was not a handsome man and certainly did not practice the best personal hygiene habits.  I will never forget him clipping his fingernails throughout each sales meeting.  The attention to the length of his fingernails was not needed, especially during meetings.  I doubt that very many heard what was going on as it was just a little clip, click and movement that would only irritate those closest to him.

He often uttered statements under his breath when he disagreed with something that was said and had no problem interrupting the boss if he felt that what he had to say was important, whether or not it was germane to the topic.

Many of us had complained about his obnoxious behavior, non-compliant work methodologies and that he just did not seem to fit the culture of the company.  You could say that he did not bring out the best in us.  No one could understand why he was kept with the company.  His production was always just above minimum standards and usually not in the target market of the company.  Many of his deals were full of trouble from start to finish.

One day after a particularly obnoxious display that even took the boss by surprise, the boss told Archie that he would give the office the right to fire him since he had offended everyone.  He told Archie to prepare to state his case for remaining to the entire office the next day.  The company would prepare an overview to cite the reasons why he had been hired and retained.  People who wanted to speak for or against Archie would have the opportunity, but were asked to also let the boss know in advance.  There would not be impromptu opportunities and it would not be a bashing session.

The next day, Archie came prepared.  He had dressed up and cleaned up as much as possible.  He had notes in hand and carried his head a bit bowed like a dog that had been reprimanded.  Everyone felt a bit of remorse for having complained.  The meeting was called to order and the boss went first with the company overview.

He explained that each of us had been hired because we brought something that no one else in the company did, making a complimentary group with few that encroached on others.  Archie, he explained, served a cultural segment of the market that would not be served by anyone else.  While these were not the highest volume transactions, they represented a steady market that not only contributed dollars but, more importantly, were a part of the chain that fueled the transactions most of us preferred.  Without Archie, someone else would have to be recruited to serve that segment of the market.  Facts and numbers were presented with an ending statement that no one was irreplaceable.

Archie took his turn next.  He told us a little about his background, he had come to this country with little except ambition and a desire to make a better life for his family.  The ethnic circles he joined were tight and welcoming which presented a wonderful business opportunity.  His circles were proud that he had been hired into our office as it represented his achievement.  They wanted to work with Archie through our office, as it was the visualization and actualization of the American Dream.  He was sincerely apologetic for his behavior and said if allowed to stay, he would do his best to be a part of the office rather than trying to get our attention.

The room was silent.  Those who planned to speak declined the opportunity.  The boss addressed us all and explained that just like in a garden; there have to be plants of all kinds to make sure that the garden is healthy.  The weeds, moss and ground plants often keep the dirt from washing away from the preferred specimens and if managed make the garden more stable and healthy.  Each has a purpose and managed to that purpose with control everything will bloom.

The vote was taken.  Archie remained.  He became a solid contributor and worked hard to channel his need for attention to productive results.  We all celebrated the weed in bloom the first time he made salesman of the month.

Thanks for sharing information :)