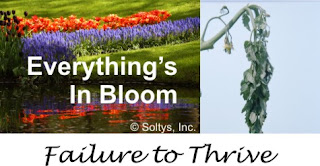 Every gardener knows that there will be plants that just do not do well.  In some cases, it is where they were planted, the soil mixture, light, shade, water and a host of other causes.  There are cases where it was simply a poor specimen or bad seed.  In all of these cases, there is a failure to thrive.


In business, we see many examples of people who seem to have all of the right qualities and promised to be a good fit but never seemed to be able to succeed.  Many of us will pour heart, soul and effort into these people with training, coaching, mentoring and even coddling.  Frequently, we try to move them into new positions, place them on a different team and yes, if they are in sales, even feed them business in hopes that a taste of success will be just what they needed.  We made the hiring decision and feel a great responsibility.  It takes a while to develop a bit of a callus that allows us to, as one person put it, – “promote them to the next stage of their future” more efficiently.
Failure to thrive may occur at any level and in any role of a company.  Let me tell you a few stories about people who just did not cut it.


Ben was the guy always in the center of the crowd in any room.  He was a people magnet.  You could hear his laughter, other people laughing with him and every conversation in which he was involved was highly animated.  Everyone knew Ben and he greeted each warmly seeming to always remember their name and a tidbit of something meaningful to them.  It appeared that he might be right for sales or maybe even leadership.  He was hired into a sales role and asked to have some sort of a title that would set him a bit apart on his cards.  Since titles are cheap to give and do not necessarily mean much – why not?  A title was created.  It was actually modest but might as well have been King, Emperor and Ruler from the strut that resulted.  It set Ben apart from others and was a gentle feed to an ego that seemed so full of promise.  Ben got busy letting everyone in his vast sphere of influence know about the new position and title.
First month went by and no deals were initiated but he was very busy.  He had been in training for a good part of that time and setting up his “systems.”  Second month, he promised that he had a lot on the cusp and deals would be on the board soon.  Third month, still nothing, he said that he could really use some help on conversion – more training and some coaching.  Each month, there was a new promise, a new excuse, a new initiative to make things work in hopes that the spark would become a flame.  The title that had been given was also becoming a real pain among the producers who had never asked for a title.


One day, Ben came in and announced that he was going to another company.  While there was some relief in not having to fire Ben, there were a number of feelings that invaded immediately.  What had not been done?  Why didn’t this work as there had been so much promise.  Would the next company reap the benefit from the investment that they had made?  About a week later a different atmosphere was really noticeable in the company and spirit seemed to have returned.  While Ben had always been at the center of a crowd, he was also the elephant in the room that sucked all of the air out of a room as if he was a vacuum.  In reality, he was a black hole, devouring everything and returning nothing.
Marty was the son of the owner.  Ever since the day he was born, he was the presumed successor to the family legacy.  He was bright, personable and enjoyed being in and around the company.  When it came time for him to go to college, he decided to pursue technical studies.  The family encouraged this route as it promised to be an important part of the future of the company.  Marty was a good student but not a passionate one.  He graduated and immediately came into the company to take over the company’s technology initiatives.  It did not take long before he was fully nested in the role.  He was always researching the best solutions, software, vendors and proposing things that the company could employ to meet its needs and give it a cutting edge position.  He was great at spending money, getting people excited and enjoyed the fact that his knowledge of technology created a uniqueness, a mystique and built a need for his work.


Discussions in the family and with Marty often turned to preparing him for the role of leading the company.  He did not mind going to meetings, conventions and being in situations where his position as the heir apparent worked well but technology was his love and there was no true integration or path to acquire the skills and talents that would be needed.
People were hired that could complement his skills with the thought that the leader did not have to do it all but needed to manage the people who could take care of roles and responsibilities.  He was neither the peer nor their boss.  The more pressure that was put on him to take significant roles, the more deeply the technology requirements swallowed his efforts and interests.  It was obvious that he was not interested in leading the company in spite of the opportunity and cultivation to take the lead.


Mary started off in the company like a house on fire.  It seemed that everything she touched turned to gold.   She was truly blooming where she had been planted.  She was organized, very social and understood the business to a degree that she made few mistakes and required little assistance.  She was the type of person that everyone wants to clone.  Her first year was spectacular.  The second year, it seemed like she just could not get started.  She buried herself in details and busy work.  Her production paled when compared to the previous year.  First everyone kind of left her alone thinking that she would soon find her mojo.  Then it was decided that some one-on-one coaching might be needed.  Lots of other techniques were tried but the rocket was out of fuel.  She was a one season bloomer who became a person that everyone kind of tiptoed around and whispered about.  Some suggested that she just needed a rest so she was given her space.  Mary’s production was dribs and drabs.  It was just enough to make minimum standards.  She became one of those fixtures that doesn’t seem to cause any harm so you keep them.  The harm was that she was a wet blanket, weighing down energy and excitement.
There are many more example of “failure to thrive” that are in different situations and roles.  Companies that suffer the greatest from the impact of “failure to thrive” either do not have or do not use accountability and performance systems.  A part of these systems begins in the hiring process with validations of experience and expertise.  Once hired there is a training process that is specific to the career path that incorporates their strengths, leverages their talents and exposes them to growth opportunities.  All processes and measurements have time lines with decision points.  Putting processes in place does not remove the heart you invest but empowers the heart to make the right decisions for the good of the company, individuals and the team.


All companies and gardens will experience “failure to thrive”, hoping for growth and blooms where there is nothing happening can be costly and may define the company or garden by what shows to the public eye.  Keeping everything in bloom, requires selection and tough decisions on when to pull an under or non-performer.


This article is interesting and useful. And let me share an article about health which insha Allah will be very useful if we use it again for others.