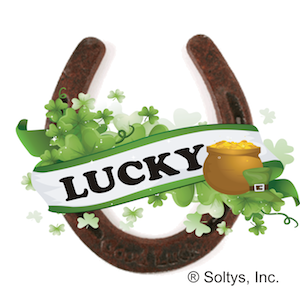 I am not sure, but I think that I was born “lucky.” I had the good fortune to be the first child in a family that believed in luck and lived for lucky experiences. It was actually an expansion of faith, as any circumstance that could not be attributed to a prayer being answered had to be luck. There were many signs portending a soon to occur lucky experience, whether it was sighting a rainbow after a rainstorm, a wish made when blowing dandelion seeds, the hatching of the lady bugs and so much more.

Luck did not always appear in substance, perhaps only as a penny found on the ground, but it could lead to great things. A story I have heard about Warren Buffett is that he was walking into a meeting with three other businessmen. Each of the three walked over a penny on the ground but Buffett stopped, picked it up and held it in the air proclaiming that he had just found the start of his next million.

A dictionary defines luck as – “Success or failure apparently brought by chance rather than through one's own actions.” Most definitions attribute luck to a random, unplanned event or circumstance. My definition of luck is closer to that of a quote from Seneca - “Luck is what happens when preparation meets opportunity.”   Our actions, positioning, planning, timing and choices probably have far greater impact on our chances of being lucky than any random occurrence


Does that mean that luck is never random? No, but you have a much greater chance of experiencing luck if you have prepared to be lucky. You may buy the lottery ticket but you do not control the randomness of the numbers drawn, nor the number of people in the pool. The penny had to be dropped to be found. In Las Vegas, I go, knowing that the rule is that the house always wins in the end but, understanding that there will be incremental wins and on occasion, a random jackpot. The business need has to exist to allow a business to be profitable. The randomness always has definition which changes the odds.

This month, we will profile luck and people who are lucky, circumstances that position people and companies to experience luck and some of those stories that are hard to explain in any other way.

Yes, I was born lucky into a family that believed in luck but understood that they could not be dependent on random circumstance. Hard work, positioning, timing, knowledge and the choices made changed the odds to favor being lucky. So, as we put together the tokens that we believe help us to be favorably positioned to be lucky, whether it is a favorite item of clothing, a coin, a shamrock, a symbol or an action, be ready for a month of luck experienced through our posts. I’m ready - I’ve pulled out the horseshoe from my Grandfather’s favorite mare.