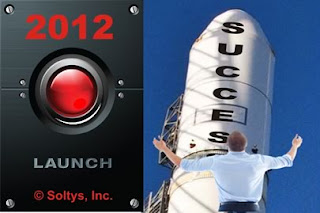 How do you embrace success? Isn’t it a point in time or the moment when the executed launch achieves its mission? If you are thinking that way, you will not be able to reap the many long term benefits that are available.

Embraced success extends empowerment, communicates and continues to drive the glow and momentum of the achievement. Look at the two companies profiled below.

Van Guard was the owner of a company seeking to redefine itself in the industry. Motivational speakers had been brought in, practices with wonderful statements adopted and stretch goals created for each department and person. The elements were there to kindle the fires of success throughout the company. People were empowered to perform and achieve, or so Van thought in his dreams.

His company was “Old School” with a hierarchy of mammoths whose movements were slow and deliberate with only one purpose – feeding themselves. Even, if it meant walking on everyone else to do it. Van thought that he was reaching into the organization, gaining buy – in and using talent by talking to and meeting with different people from time to time. However, communications only went back to the mammoths who really did not want anyone who worked under them finding a way out of the cave or to taste something new or different.

Several of the fires actually grew, creating bright spots in the company that could have been shared. The mammoths, afraid of fire, did not want it to spread and graciously accepted Van’s praise and reward but never shared it. Over time, the people tired of getting all excited, making things happen and then having their results smolder to nothing in the cave. The opportunity to embrace success was lost and the company is on the same path to ancient history as the mammoths that once roamed the earth.

Susie Shoestring had once been one of the people kept in the caves at Van’s company and, as a result of the mammoths squelching anything new, found herself persona non grata with all of her ideas and passion to make a difference. She did not have much in the way of money but knew if she could energize, excite and empower people, nothing was really out of reach.

She had listened well to all of the gurus that had been brought in and adopted many of their practices. The slogans she chose were not empty and were validated at each point possible. Perhaps her greatest skill was in recognizing success, achievement and proactive actions in others. Her executive team was coached to find success, every day, in someone who worked for them. Communicate it, celebrate it (proportionate to the success), learn from it and teach others from it. Success was fully embraced and used to create greater and more significant successes.

It not only became a record of personal achievement it was incorporated into the history of the company. Success became a creed that gained so much momentum that it was impossible to be a part of the company without being touched by it. In fact, it became the great “secret” in the industry, with people wondering what they were drinking over there. The culture became so powerful that it drew others to it, in spite of compensation and benefit issues. The speculation grew that it would soon be recognized for what it was and die out. What the naysayers did not realize was that embraced success is such a powerful force that it regenerates itself because it is built on what drives people, communicated with passion and caring.

Everyone was looking at the company Susie was building with a traditional perspective, but she made sure that her company did not have the traditional baggage, she could not afford it.

Susie was able to take most of the talent out of the caves, not because she actively recruited them but because, everyone wants their place in the sun. She is growing greatly. Sure there are challenges, but each of these is met with the power of embraced success propelled forward as if riding a rocket leaving all those rooted to the past behind.

Today’s post concludes the launch series. It is appropriate that the last post is Embrace Success as tomorrow we begin the February series Loving and Business in which we will talk about how we love our business, relationships both powerful and toxic and showing the love.

Any disease will surely recover, if we want businesses seek treatment :)

Good and well-organized articles, thank you for sharing this information