Creativity In A Box 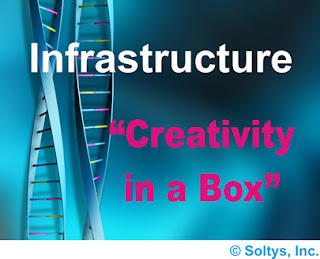 I just returned from the National Association of Realtors® (NAR) Convention in Anaheim, CA. This is an important conference for Soltys, Inc. as about 85% of our business is with larger real estate companies, organizations and franchisors. The keynote speaker at the general session was Michael Eisner, formerly of Disney. He gave his “Creativity in a Box” presentation, with some customization for the audience.

His ideas around “Creativity in a Box” exemplify a component of great infrastructure – creative growth within limitations. Infrastructure must have some flexibility within defined parameters, especially in the financial area. Without those limitations it would be difficult to have profit produced from creative initiatives. Without the creative initiatives, growth will be limited.

Infrastructure, which sustains as well as partially defines the size, shape and functions of a company is also the box. In some ways, this box is more like a balloon. There is shape, purpose and limitation. It also requires that the air contained within and necessary for the shape be retained to limit leakage. There will be leakage, so new air must be introduced to maintain the balloon. Too much air will make the balloon pop. Too little leaves it limp and weak. The creativity comes in working within the capacity for volume to ensure that the balloon is always maximized. This may include different types of inflators, including those which are not air, as well as temperatures and environmental conditions.

In each well known movie used by Eisner as an example, the creative person(s) had an idea of how to enable the viewer experience and saw only one way until challenged to stay within the box. Each of these carried the impact and user experience while reducing cost and time. In some cases, the user experience was actually heightened due to the fact that they had to use more of their own imagination, rather than being given the entire experience. It encouraged greater creativity.

He also applied the age old K.I.S.S. principle to keep things as simple as possible with the same effect.

These decisions to make sure that creativity was within the box were not always easy or without risk, requiring management and leadership. There were times when creative talent did not want to budge from their concept. As Eisner said, “Fearful people make mediocre decisions.” Any of these examples could have grown or changed the shape of the box without strong decisions and leadership unwilling to change out of fear. As he demonstrated in the examples, the final product would have been impacted with a mediocre decision. The infrastructure would not have worked and the monetary opportunity would have been reduced.

Finally he referenced a key element shared by some of the greater business people we have known including Steve Jobs, Walt Disney and others. To some degree, they were all micro-managers, knowing the importance of the details in the success of the venture.

This was not a new presentation, in fact, there are many references to it and YouTube videos displaying it as delivered to other organizations easily found by simply searching “Michael Eisner, Creativity in a Box” in an Internet search. There you will also find many of the examples he used to illustrate the points he made.