The Infrastructure series will posted on Tuesdays, Wednesdays and Thursdays through the month of November 2011 (except the week of Thanksgiving). 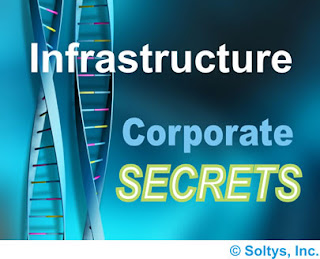 Last July, we posted a blog series called Brand Change, and, while no company was named, several companies thought for sure that we were writing about them. Some of those even did a lot of finger pointing, suggesting sources of information and leaks. The reality of it was that there were a lot of bread crumbs left lying around with trails that led to potential conclusions, validations from many sources and logical processes that would surround such corporate actions. Internal leadership may have thought that there was a breach but there is little that can stay a secret when it involves a lot of moving pieces, lots of people and basically lives in an Internet open world.

There are always rumors, just like there are today about the same companies with actions, activities and positioning all pointing toward a likely culmination of events, some by the end of the month and some by the beginning of the year. A few will straggle to the end of the first quarter. All of these are dependent on the success of the effort more than the validity of the rumor.

If you want to keep things close to the vest in your company there are a few key concepts to consider:
When we look at the importance of communications as a part of the infrastructure of a company, understanding the dynamics of both intended and unintended buzz is critical. If the Trojan Horse had been in today’s world with the Internet, it would not have been able to enter the city of Troy.