The infrastructure of any company cannot exist in a void of communications.  Every element that we have referenced in this series is dependent on communications from hierarchy through creativity.  It is also perhaps the most challenging element as communications can be impacted by outside forces and channeled by misinterpretation, innuendo, and influence.  Over the next few days our series will address communications. 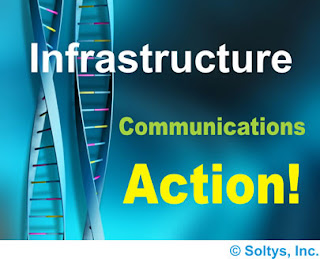 As mentioned in earlier posts, there needs to be some built-in flexibility and the means to change as needed. These need to come within the tolerance for change and limitations set. When actions are interpreted to be random or not aligned with the structure that is stated as the definition of the company, the company is weakened and open for attack from inside and competitors.

Thanks For Sharing Information ;)


Thank you very helpful article. allow me to join to share health articles with your article hopefully useful.

His article is very helpful at all thanks