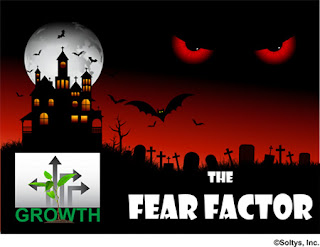 Since it is Halloween, we will address the fear factors that can cripple growth as the final post in the series. Like the ghosts, goblins, ghouls and stories that are a part of Halloween, most of these fears originate and dwell in the mind. Companies who want to grow have to be able to put the fear factor in perspective rather than in focus. Perhaps these stories will help you exorcise the things that haunt you most.

“The Legend of Sleepy Hollow” - Ichabod Broker had targeted a producer who he felt was a prize. He had never been a confident person and always felt that he was not quite good enough to ask for a big producer’s commitment. He believed his chief competitor Brom ”Pick Your Bones Clean” was always right there with uncanny timing, delaying or killing his opportunity. He was great at getting the candidate to the point of being interested in the move and then like a horseman, Brom would meet the candidate and the opportunity was Brom’s. As Ichabod’s confidence diminished, his active imagination conjured up many scenarios in which his initiatives would be defeated by Brom or some other competitor. Ichabod became the headless horseman, riding into battle each time to find his head without success. He was literally caught in the trap of his imagination and stopped trying. Eventually his company was picked virtually clean and, no longer able to survive, he was gone. Had Ichabod made his move, the game would have changed.

“The Great Pumpkin” - Linus really believed that he was destined for great things if he could just bring a star producer on board. He had worked hard, met with Mary many times. Just like the Peanut’s character, waiting for the “Great Pumpkin” to arrive, he was prepared in every way possible. If Mary would join his company, his goals would become reality. He did not realize that Mary had no intention of coming. Sure she would meet with him, asking great questions and always agreeing to stay in touch each time. There was always an implied promise that she was almost ready to move to his company, just enough of a promise to keep him believing. He did not hire others who were good and refused to use the items set aside for Mary. The Great Pumpkin, whether a deal, a person or any other type of opportunity, never really comes. While waiting on the big one, great opportunities come and go. Perhaps as the old saying goes, a bird in hand is worth two in the bush.

“The Devil Went Down to Georgia” – I got the call from the Regional Director in Georgia. There was a new competitor in the state who seemed to be a mystery and growing quickly. The scary part of the growth was that they were taking away the producers from Georgia companies to build this new company and everyone felt they were a target. The rumors and concern grew quickly, stirring fear and immobilizing the group. Who were they? Why were they successful? What was the value proposition? A lot of time and resources were spent gathering information and kindling the fear without action. They were looking for a competitive strategy but never considered attacking the attacker. The attacker never had to play defense as everyone was working to secure their companies. The aggressor often wins as they are seldom attacked and only have to execute offensive moves.

“V” – They seemed like the perfect people when you brought them into your company. For a long time they seemed to fit in and they certainly added a lot in production, use of technologies and building teamwork. Then one day, you started to notice little changes. The changes at first were subtle and perhaps you could feel the changes more than see them. The culture was changing. More people were aligning with the V group and they were growing as they were also bringing in more of their own. Soon you were not sure whether anyone was aligned with the company you thought you owned, or, were they really a part of the company being built from within by the V’s. At the point the V’s make their move, they may take your company with them. The V’s would not have gained control if needs were understood and addressed and the leaders did not allow leadership to migrate to the new group. Growth requires attention to the business base.

“Silence of the Lambs” is a great psychological thriller. Who can forget the scene with Anthony Hopkins playing Hannibal Lector in the leather protective mask asking agent Clarice Starling, “Tell me, Clarice – have the lambs stopped screaming?” Many companies have people both inside and out who are exceptionally good at playing on the psyche of owners, leaders and managers. At some point they have shown vulnerability or voiced a fear. They know how to push buttons, get a reaction and distract the company from its objectives, forcing an undue concentration of time and effort. If you allow them to draw you into their world, it will seriously undermine your growth by taking away time and focus. While you may not be able to ignore these people, you must stay in control and isolate their impact on you.

These stories and shows may not be specifically aligned to your business but they are remembered and are retold primarily because they feed our imagination, tantalize that which we fear and are based in legitimate fears. Understanding our fear factors and what we need to do to overcome them, work with them or be motivated by them can be a powerful part of ensuring growth.

This post concludes our Growth Series. Our November series will focus on infrastructure.

his article is very helpful at all thanks

Continue to Perbiki his blog to get a good blog !!

The information that is interesting, thanks for sharing :)