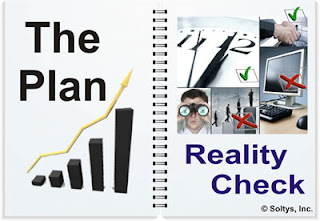 Some plans I have reviewed make me hear the song from Man of La Mancha, “The Impossible Dream”. Unfortunately, there is not much honor in chasing the unreachable business star, no matter how valiant the effort has been.

Business plans constructed in dreams or need rather than reality are expensive in every way conceivable. It is like working with the seller who has determined the price at which they will sell their house, irrespective of what the market will bear and some real estate agent will take the listing in hopes that if an offer comes in, the seller will change their mind. So, how about a reality check up front?

Remember when you took elementary math classes, you checked your work by calculating the problem backwards. We can do the same with business goals and plans using basic items and Key Performance Indicators (KPI’s). Here is a look at a very simplified check of a sample company that sells services (click on the graphic to view full size). 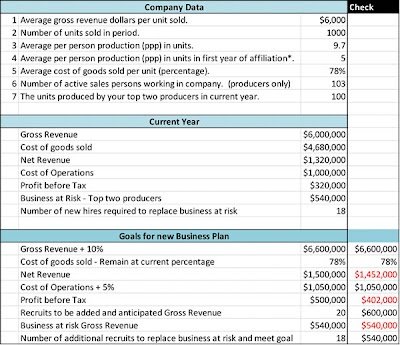 (* Note that the production for new hires is an average based in the fact that not all join
at once and there is usually a curve for production that must be applied.)
In this example, the numbers are checked against the goals in a very simplified format. This company will not make its net revenue goal and consequently will miss its profit goal by nearly 20%. Should the top two producers leave, get hit by a bus or otherwise, the company stands to lose an additional $540,000 and it will take another eighteen recruits to replace that production on top of the twenty in the goal. This potentially makes the actual recruiting goal 38 to meet goal. If the top two producers do not leave, nor others who would impact the numbers, the company will most likely exceed its goals by hitting the higher recruiting number.

Business at risk calculated on the basis on the production of the top two producers is a reasonable factor to cover loss of potential producers. The top two are used as it is not unusual that when one of the top two leaves the other does as well. It also gives insight to the impact of these producers who, in this example, account for over 11% of the company’s gross revenue in the current year.

The company could change any of the variables to quickly see the potential outcome. In most cases, reality checks are created for all KPI’s and most major initiatives. When applied to any part of the plan to check goals, questions will result that need to be answered.

For example if the number of new recruits is far greater than previously recruited, what is the change factor that will make this an attainable goal? Where will these recruits come from? Is there anything that can be done to raise production numbers in the first year?

As important as it is to create a business plan, performing reality checks is perhaps more important. No one wants to mourn the impossible dream. It is a lot more fun to sing songs that celebrate your achievement.

the article is very petrifying, hopefully it can be useful and an important lesson