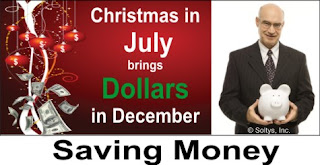 Recognizing and taking advantage of an opportunity is a skill that only the best of leaders possess.  It goes beyond ideas and people skills as it requires an awareness of the environment and sometimes the guts to do something about it.

The owner of S and Company decided to focus on the money this week in his Christmas in July initiative.  His attention on making money would not turn to the flip side of the coin – saving money.   Every fiber of his being loved the proactive side of business.  He had grown his businesses and lived by the axiom –

“You can’t save your way to wealth.”

He knew in this initiative that rather than trying to save money by making large cuts or changes, it would be the small things.  He wanted to create a pro-actively efficient operation that would change the culture and habits of people from users to stakeholders.

The opportunity was in front of his eyes.  In the Christmas in July initiative, everyone had an opportunity to win and rewards were based on profit.  He had the opportunity to utilize peer influence to create savings especially in the small things.  It would take a little education but that did not have to be formal excepting with the management team.  Everything else could be subtle, he could even have some fun with it and probably leverage the momentum he had set in place by working to make the company a green friendly company.  Red and Green as colors also worked well as a part of his plan.  Best of all, if it was a peer movement, it would not be seen as a top down mandate.  It would create ownership of the action and results.

Through the peer representative group that had been established, he knew he could start the ripple that would become a peer objective.

He told the group that since the rewards for achievement that were based on profit, there were ways in which each person could contribute to the goal through little things.  He outlined some of the ways which were small and yet could make a difference.  If everyone simply encouraged others to be proactive, it would be easy.

All of these were really small things that did not require extra effort but rather a consciousness and would also apply to their own business practices.  The peer representative group and the managers saw these as easy wins and asked if there could be some sort of reporting on the monthly impact.

The owner agreed that he would produce a graph that would show overall and line items that had change that were impacted by everyone.  They also gave a number of suggestions on their own.  The time between the initiation of these cost saving measures through the end of December with reinforcement through the impact graphs and recognition would create new habits that would carry well beyond the Christmas in July Brings Dollars in December initiative.

All the contents you mentioned in post is too good and can be very useful. I will keep it in mind, thanks for sharing the information keep updating, looking forward for more posts. What are some of the cheapest places to travel to in the world? From Asia to Africa and Europe, Things to do 's got budget breakdowns for the cheapest places.

We are providing an ideal opportunity for Pakistanis to overcome their meaningless bounded activities, for example, scrolling over the web! . We are here with a dedicated team for bringing latest news about THE UNFOLD events .It can be about Technology, Health , Business, Islamic or International .We assure you that our work will be with full of responsive talks.
Business