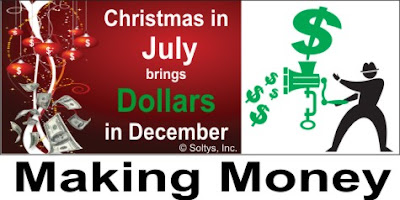 The owner of S and Company knew that he had done so many things right in the kick-off of his Christmas in July initiatives. The stage was set to keep the momentum going to produce revenue that would make the fourth quarter and December one of his best ever.

This week he decided to turn a lot of his attention to the money side of the business. He decided to group his efforts into making money, saving money and using money. Money is not simply the end result of a business initiative, it is a tool, it is security and it is leverage. The initiatives that he put in place would produce revenue, but not necessarily a greater percentage of money that would hit the bottom line unless he changed something.

His margins in his core business were pretty skinny due to market and competitive pressures, so energy and time spent in that area would yield little additional return. He had many other components in his enterprise that had higher margins. Some of these were stand-alone products and services but most could be sold with the core business transaction. In fact, almost every one of the products and services in the group would be needed and purchased somewhere by the customer on the course of the transaction.

The answer had been in front of him all of the time. He had built a great enterprise but it had a lot of elements that were not connected and the customer base was not leveraged to create multiple purchases.

What were the roadblocks that kept this from occurring naturally? Thinking about it, the answers were fairly simple but the solutions would be more complex.


A visit to the grocery store gave him some ideas. What if the web site which drove most of their business and was a resource for consumers and sales people had virtual end caps? What if at different points when they visited part of the web site a virtual nudge appeared to bring awareness to a related product or service? Could he place other triggers that would bring all tangents together and in focus?

Could he also leverage his customer care group for presales rather than focusing on post-sale only? Were there metrics that would give the sales team confidence that leveraging the enterprise did add to their rewards in terms of easier transactions, customer stickiness and friendly internal vendors?

The more that he thought this, it also struck him that the education in the company by default created an adversarial relationship where salespeople were individual hunters rather than having a business partnership with the company. He realized that market pressures had created the thought process that the salesperson would not make as much money if the company made more money.

There was a lot of work to do. Lots of opportunity and he could see that a few tweaks would change the picture so that revenue also had a higher profit margin by focusing on the enterprise rather than individual components. It would not be a quick change but more of a systemic change that would touch almost every component of the company. He knew that individuals and the company would be stronger as a result with tighter bonds which meant a long term return on his investment.

I really thank you for the valuable info on this great subject and look forward to more great posts. Thanks a lot for enjoying this beauty article with me. I am appreciating it very much! Explore photo and video images on Instagram, latest posts and popular posts about Pikdo.