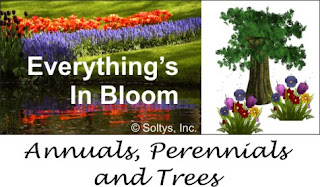 I have always tried to plan and plant my gardens so that something is in bloom all of the time.  This means thinking about which plants bloom at specific times during the year.  Pansies bloom most of the winter here but when the heat begins to build, the only real option is to take them out and replace them.  I really like annuals like pansies but the time, work and need to replace them seasonally make these far less desirable than blooming shrubs and trees that I can count on year after year or the perennials that come back each year providing a great show and little work.
There is suitability to the climate, timing and relationship to other plants to be considered as well as how the plant fits into the plan for the garden.   It is the same for businesses.  Using the analogy of the garden in planning production of a business, a company can override many seasonal issues and eliminate the swings in revenue and profitability these create.  This is especially true in sales businesses.


Newly hired sales people in most industries have a fairly high attrition rate.  Sales as a career is not for everyone, especially those that do not plant their roots and set a good foundation quickly.  Like annuals, they require a lot of work.  You know that you are going to be constantly recruiting to replace these as not many will return for the next season.  Those that return found favorable conditions for growth and production.
One sales company taught a class called 2 & 1 as there starting class, as they felt that everyone had at least three sales in them regardless of whether they stayed or not.  They nurtured these new plants to produce at least those three transactions and gave them the fertilizer and opportunity to develop deep roots.  In spite of all of the work, the attrition rate was still over 50%.  However, unlike many of their competitors, they benefited from the three transactions as it was ingrained and expected from point of hire.  The owners of these companies found that by having a continuous recruiting program, these three transactions still had a strong likelihood of occurring and were not subject to seasonality that some of their perennial sales people were.


The perennial sales people could be counted on for good production but it was generally full of ups and downs.  Worse yet, it seemed like all of the perennials were on the same blooming or production cycle.  Like plants that are perennials, the sales people would put great effort in producing magnificent production three to four times per year.  It was interesting that the cycles correlated to the time frame from opening a transaction to the point that it closed.  If the producer bloomed and produced one to multiple transactions during the closing period no new blooms were produced, creating the cycle of production and what appeared to be seasonality.  Like the blooming plants, the reward, recognition and appreciation systems were all tied to the opening and closing of business, not consistently managed production.
Trees and shrubs, whether deciduous or not, are a presence all year long and in general have a long life span as long as they can take root in the right environment.  Each season, they present us with something special to admire.  I have many trees and shrubs in my gardens, each planted and planned to ensure that no matter when they are in bloom, bud, new leaf or always green, they have a place and a purpose.


All of these require work, many will need to be replaced over time and in some cases when the purpose of the landscape of garden requires more than pruning or adding more, uprooting, transplanting or change may be required.
I will always plant some annuals for seasonal color; have the perennials which show off during their blooming season and have the trees and shrubs which bring continuity.  Managing and recruiting to production needs as if it were a garden where something is always in bloom will leverage talent, assets and reduce seasonality.