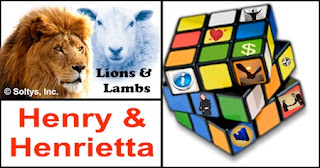 In most companies, relationships play a strong role, in some cases adding strength and in others sometimes creating a weakness. Each company and most groups have a multi-dimensional matrix of relationships working at any given time with puzzles as challenging as a Rubik’s cube.
Henry owned a company that had always been a leader in the area. He was kind of an iconic figure in the community, fathering many community and business initiatives which in turn helped to develop many careers. He was known as a man who could see opportunity clearly, create a path and lead people to successful results. His company started modestly, a dream for Henry and his wife, Harriett to seize control of their future and build wealth.

Henry was always the front man and Harriett was often behind the scenes. As the company grew, more people were hired, new roles created and along the way many new business and non-business relationships found fertile ground. One day, Henrietta was hired to the administrative team. She was a smart and savvy woman with great aspirations.

Over time her roles in the company became more significant and reached into almost every area of the company. Harriett preferred the background and had hopes that she would one day be able to stay home and take care of the family. That day came and she nearly disappeared from the company, attending only functions that demanded her presence. Henrietta became the person that more often than not was the person next to Henry at functions. It made a lot of sense as her work in the company also necessitated her presence.

Henrietta became nearly irreplaceable in Henry’s eyes as she was as close to a peer as he had in the company. Together they wrote the business plans, managed the people, considered opportunities and ran the company. Henry thought it was great that not only was Henrietta a business person, but it also gave Harriett the freedom to stay away from the business. The closeness of their work became a complication in the company. People were unsure as to whether they were a couple as well as people who worked together. Sometimes it was even difficult to tell who the boss was as Henrietta took over more responsibilities. The closeness caused difficulties in their families as well with the respective spouses being out of the day to day picture.

When her kids were in their late teens, Henrietta divorced. Without kids or a husband to take care of, she dove even harder into the work of the company. The working relationship with Henry became deeper as it also came at the time of the economic downturn and what had worked in the past did not produce the same results any longer. Making the changes necessary for the company to survive meant that both Henry and Henrietta were working together more than ever. Between the monetary pressures brought on by the economic downturn, the fact that Henry was never home and his kids were now on their own, his marriage also dissolved.

Now that both Henry and Henrietta were both single the rumor mill flourished especially since they often dined together, went to business functions together and were working so closely together at the company. The rumor mill is always a painful grind where truth is merged with innuendo and suggestion fueled with fault finding. Neither Henry nor Henrietta realized the battle they were in or the forces that would be at work. Since business times were tough, people had more time for speculation. Each time they were asked, they denied romantic involvement.

The strange byproduct of their constant work together and frequent companionship is that they no longer thought differently and most roles were now tandem. They saw their efforts as one and as a result lost perspective that mitigates risk. Their language and reasoning aligned to where the fault for the problems was economic, competitive or something else beyond their control. It could not be them because they were working hard and doing the best that they could. The company did not grow and was challenged in new ways. It was now fighting the battle with one resource rather than as two separate people with defined roles, a loss of 50% of their power. The lion and the lamb had merged into one creature and confused everyone. The strengths of the company were no longer identifiable.

Whether love is blind or not, I am not sure but in this case they will not find their individual strengths, stop the rumors or see the solutions to their puzzle until their roles are defined and they once again have perspective. The issues that Henry and Henrietta face are not unusual in companies where business and social relationships are so heavily merged. Solving the issues the puzzle makes is similar to solving the Rubik’s cube, you have to be able to stand back and see it clearly before moving individual components. Each is linked and will cause change.

Email ThisBlogThis!Share to TwitterShare to FacebookShare to Pinterest
Labels: Leadership and Management, Lions and Lambs

This information is very useful. thank you for sharing. and I will also share information about health through the website