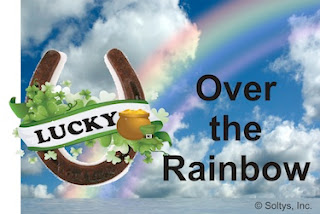 This morning when I went outside, the air was fresh after a light rain. The sky was beautiful with a few puffy white clouds floating to destinations unknown. The birds are singing and if the sun comes up before the last of the moisture in the air clears, I believe there will be a rainbow.

It is hard to see a rainbow and not smile. It also often conjures up all the old fables related to wealth in the form of a pot of gold at the end of the rainbow. Irish tales of luck and lore actually had deep roots in the old sod. Some were based in ancient religious faiths. Most that were related to luck, wealth and well-being were meant to not only inspire but to teach.

While we think of the Irish as believing in luck, and they do, they also knew that you had to reach beyond what was tangible to create your luck. The rainbow was a great visualization of something that could vanish quickly if you did not have the luck (timing and opportunity) to see it. It also represented a path leading to a destination that would be worthy of the journey. Rainbows and the lore built around them and other charmed things inspired dreams and fantasies which were often the beginning of goals and plans.

The source of charms and luck included many symbols and stories including:


Speaking of luck, just how lucky did St. Patrick have to be to drive the snakes from Ireland since there are no snakes native to Ireland? Perhaps the legends are built around driving away bad forces, luck or people who are sometimes represented in lore and business as snakes.

I am getting out all things green, every charm representing luck and preparing to celebrate one of my favorite holidays, St. Patrick’s Day. The music, dancing, lore and small pranks are not only fun, but seem to bring out the best in everyone. Perhaps that is the true luck of the Irish.

I did catch a brief glimpse of a rainbow this morning, I am sure today will be lucky. I have a path to follow and it will lead me to my goal.

Perhaps hearing “Over the Rainbow” will inspire you to follow your rainbows.