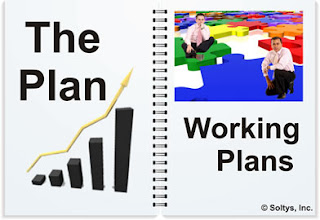 Kudos to those who plan and do make their plan a working company document, but often these companies are the exception rather than the rule. Even rarer are the companies who have communicated essential elements and objectives beyond the leadership of the company. How can you expect your plan to be executed if those who are expected to make the plan a reality do not know what the plan is? The plan must pulsate life into the opportunities ahead, meet challenges and become a path for bringing objectives to reality.

Perhaps you are one of the companies who have tracked your progress against plan. How did you do? Did you implement the strategies and tactics planned or was your plan simply calculated numbers. Were you accountable to the plan?

When writing plans, a lot of companies and business units take out and dust off last year’s plan as a starting point for writing the next plan. This, unfortunately, may be the first point since the plan was written that there was any real review. Other companies work without a plan and hope that the “Ready, Fire, Aim” methodology will work for them. Where there is abundant opportunity with little finesse required, it may seem to work for a while but has little ability to deal with change or be sustainable over the long term.

The real estate industry had enjoyed abundance for a fairly long time. Just about anyone who could spell real estate could sell something. Then almost like a date on the calendar, the industry hit a brick wall. As some put it, the bubble had burst. Most were not ready to believe that the industry would be changed forever. Not only was the volume significantly less, there had been several years of downward pressure on commissions, a rise in the commissions paid to sales associates, and rising costs of operations. The next few years saw real estate prices drop with competition for REO’s and short sales impacting valuation. New construction virtually stopped and commercial buildings now faced even more pressure as the demand for physical space was reduced by consumer use of the Internet with often virtual based workforces.

The bottom line was that every one of these forces impacted margin and the ability to operate a viable business based solely on commission driven revenue. Significant cuts in expenses were made everywhere possible. It was almost impossible to drive increased business in most markets without mergers and acquisitions to take the business away from someone else. The industry was bloated in just about every way imaginable. Accountability that had not been important now became critical but difficult to implement in the business culture that existed.

The industry faced structural changes that had not been seen in decades.

Companies that really worked by a plan often saw the changes quicker than others. The writing had been on the wall for a long time, simply ignored while there was money to be made. Management and leadership teams, many developed during the high growth period, did not have the experience or tools to consider other options for creating revenue and increasing margins. Fewer still saw ways to implement changes in the culture that had been created by the Independent Contractor sales people who had bought into the concept that since they were a commodity of value, it was all about them.

The structural changes companies needed to make with pressures to commissions and fees included expansion of services and products where the real estate brokerage business was often the initial point of business generation for business units and related services. These companies had also, in many cases, given up relationship and ownership to the consumer base served by their companies to individual practitioners and anyone who could post a property search engine. Few plans dealt with these issues or had strategic initiatives in place to counter the challenges.

The good news/bad news is that the industry is a bit less bloated than it was in terms of practitioners who are actually competing for the business available. Some markets have shown definite signs of improvement including some that had not suffered the full impact of the bubble, claiming stabilization. Yet many large markets have a long way to go to recovery and the economic environment remains the elephant in the room.

When writing your business plans and calculating the related numbers, consider several points of analysis – worst case scenario, anticipated scenario and scenarios which are a definite stretch. Look at each source of revenue in terms of its potential, taking into account the pressures the create change. Challenge each area of expense against the desired operational model.

Plans written as working documents, communicated as a path to execution and utilized are often one of the best tools a company can employ. Best of all, it is mostly an investment of time, effort and thought rather than hard dollars.