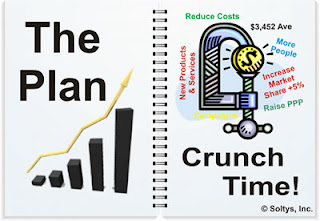 Perhaps my favorite part of business planning is crunching the numbers and watching one number change another and another as a part of the process. It can be as beautiful as a kaleidoscope in which each turn brings new patterns and color combinations.

I have seen a lot of business plans in which numbers were simply put into the blank labeled as appropriate for that entry. In many cases, the number is basically pulled from the air with little thought as to the impact that will ripple throughout the company or the strategy required for the number to become a reality.

Crunching numbers requires that we think in terms of all of the moving parts that are connected. Crunching the numbers applies force to aspects of the business and creates movement. Consider how Newton’s Laws of Motion (summarized below) really apply to business planning and number crunching as well. Replace the term body with company, unit, or any other quantifiable business unit of activity.


Each time we put a number in our plans it is not an isolated number. It changes other components of the plan and can be impacted by external and internal forces.

It is these forces that we really need to consider when choosing the numbers we really want to change. Forces are often divided into two categories related by control.

What do or can we control? What don’t we control that can impact our decisions and results? Consider the examples below of three companies wanting to positively impact results.

Example 1:  A packaging company, decided to increase the units it made in the packaging for beer products. They thought that since many of the sunk costs of production had been met, this might be the quickest way to increase profits since beer drinking was definitely on the rise and demand from the breweries they supplied should not be a problem. The numbers they did not factor in were the cost of getting the raw product to their factory since petroleum prices were increasing. Adding to the challenge was the cost of petroleum based products in the dyes they used and to maintain their machinery. The number could be met but would not return the same profit they had planned on.

Example 2:  A company decided that if it could grow its sales staff by 10% that they should be able to change their bottom line significantly. If people are units, without any conditional influences, that can work, but was far from the case. Their plan called for 70% of the new hires to be experienced and 30% to be new to the business. They calculated a time for hire to production for the new to the business hires to include training time. The experienced hires were given very little time with the expectation of some transitioned or carry over business. They did not factor in the consideration that there would be some training to their products, services, tools and methodologies as well as time for assimilating into the company culture. They also failed to consider the impact to support staff, greater demand on tools and systems and breakage where some of the existing team will leave or new hires not make it. End result, the numbers did not produce the result intended even if they hit the number.

Example 3:  A small medical practice in a growth mode decided to add another physician to be able to maximize revenue through capacity to see and treat more patients. The doctor hired was a good doctor but not used to working at the pace needed to drive the numbers. Additionally, no new patients were brought to the practice as a result. Consequently, patient numbers and appointments which are billable revenue did not increase and the revenue was not made in spite of the additional cost.

Each of these companies could have changed the outcome if they had considered the laws of motion as applied to business, seasoned with an understanding of who is in control of what. They could have changed tactics and strategies. Crunching the numbers is not restricted to business planning but should be a part of regular review. All business is like the kaleidoscope with a new view at each turn. We do not have to be surprised.

This blog is so nice to me. I will continue to come here again and again. Visit my link as well. Good luck

Any disease will surely recover, if we want businesses seek treatment :)