The Operations and Opportunities series will posted on Tuesdays Wednesdays, and Thursdays through the month of August 2011. A number of operational issues will be addressed in the blog. For more detail, depth or individual information and answers, please contact Soltys, Inc. Comments and questions are welcome. We will post answers and responses. 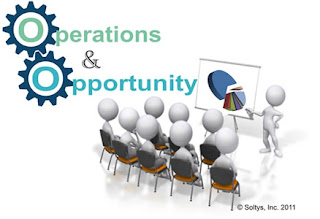 Not long after I started in real estate, I moved my license from a broker who was a sales person with a brokerage to a company where the broker really operated it like a business. Buddy Schear, the broker, made sure that everyone in the company knew exactly what it took to make the business profitable. Buddy knew that most real estate professionals were visual people, so he created some ways of getting our attention. He was treating us as business people and utilizing KPI’s (Key Performance Indicators). This was before technology enabled working virtually, people had to come to the office and there was no other way to have a business dashboard.

Each month the sales and listing boards were posted in green. The transaction posted that met goal plus a factor for fall-out rate was written in black as well as all subsequent transactions that month. We knew that profit would be achieved. If we had not made the numbers by the 20th of the month, the writing turned to red. If the numbers changed enough to meet the goals during the month, the black writing returned. If not, all transactions were written in red carrying forward into the next month until breakeven when writing became green and then changed to black when in the profit zone again.

He also had all of the names of the associates easy to see, with each month shown. You started each month with a zero and as you put listings, sales and referrals on the board, the goose egg was changed to reflect production. You cannot imagine how important it was not to have a goose egg next to your name, so everyone worked really hard to put something on the board as quickly as they could each month. Not a bad way to kick start each month. It was subtle, but since Buddy sought agents who had a passion to achieve and a bit of ego, it worked great.

He also felt it was important to know how the company was doing. Each month, a pie chart was on the wall with the major categories of expense divided out of the pie. These included all salaries and compensation for the broker and staff as well as profit and reserves. While profit and reserves are not expenses, Buddy wanted all of us to know that if those were not a part of every dollar, there was no reason for him to continue the business structure which hosted all of our businesses.

In those rare months where we did not meet the numbers, Buddy brought out a three foot foam rubber hypodermic needle which was labeled cash injection. He would explain in great theatrical detail, amusing and motivating us, how much it hurt and that he would welcome any participation in the pain of injecting cash. He then would also pull out all of the leads that he knew of that had not been converted in a bucket, dumped them on the floor and let us know the dollars for associates and the company left literally laying on the floor. These were then put in a fishbowl as open opportunities and rarely did one in the bowl go untouched that day.

Buddy managed by the numbers and not by every excuse or exception presented. Those who did not really know him only saw the business tiger. He was small in stature, less than 5’5”, but a giant in nurturing business with care, compassion and a genuine understanding of business that he transferred to each of us.

While the systems and the methods used would be considered somewhat archaic by today’s standards, the orientation to business and the numbers were critically important and built not only the company’s business but, perhaps more importantly, associates who were highly productive and business focused with an understanding that the company culture which was fun, friendly and growth oriented was first and foremost about business and profit.

Be sure to come back tomorrow for Management by the Numbers.

Here we present to introduce to all visitors in this great blog. and thank you for allowing me .

This is a very good article material and it is very useful for us all. thank you . obat menggugurkan kandungan

Thank you, the article is very petrifying, hopefully it can be useful for everyone.


This article is interesting and useful


This article is interesting and useful